There are so many benefits to being an RSL member. You’ll be entitled to the following benefits:

Joining the Geelong RSL means joining a club that strongly supports your community.

Become A Member
Get In Touch

For all enquiries please call us on:

Alternatively, write to us via the form below:

Join us in commemoration this ANZAC Day

ANZAC Day is a day that give us the opportunity to pay our respects to all men and women who have served in the Australian and New Zealand military since our country’s inception in 1901. Every year ANZAC Day is a special time on the calendar for the Geelong RSL, especially this year as we close in on the 100 year anniversary of the end of World War 1.

Geelong RSL has organised a day of commemorative services beginning with the 4.15am pre-dawn service and wreath laying at Johnstone Park. This will give you the opportunity to pay your respects and join the Geelong RSL for a traditional service.

This is then followed up by a Gunfire Breakfast at the Geelong RSL from 5:15-6:30am. A Gunfire Breakfast is the name of the breakfast a soldier would have before going into battle. Traditionally consisting of biscuits and jam or laced coffee (we promise our coffee will not be laced)—and anything else that soldiers could ration.

A little later on in the morning at 9am a wreath laying ceremony will be conducted at the RSL, after which we will gather at the corner of Malop and Yarra St for the traditional 11am ANZAC Day march. A fantastic community event in which esteemed members of our community get an opportunity to walk in remembrance of their own service, fallen comrades or in remembrance of dearly beloved family members.

After the march our Geelong bistro will be hosting lunch from 12pm. There will also be a game of two-up played at the RSL on the day, if you’re not sure what that is (a game played by soldiers during World War 1 and popular in Victoria since the gold rush) then come and check it out. It’s guaranteed to be an enjoyable day for the family, and the most suitable way to spend your ANZAC Day.

We will also be hosting a delicious bistro lunch all day and the blockbuster game between Essendon and Collingwood will be played live on the big screen.

A full rundown of the days events can be viewed below. If you’re looking for more information please don’t hesitate to contact the Geelong RSL. Lest we forget. 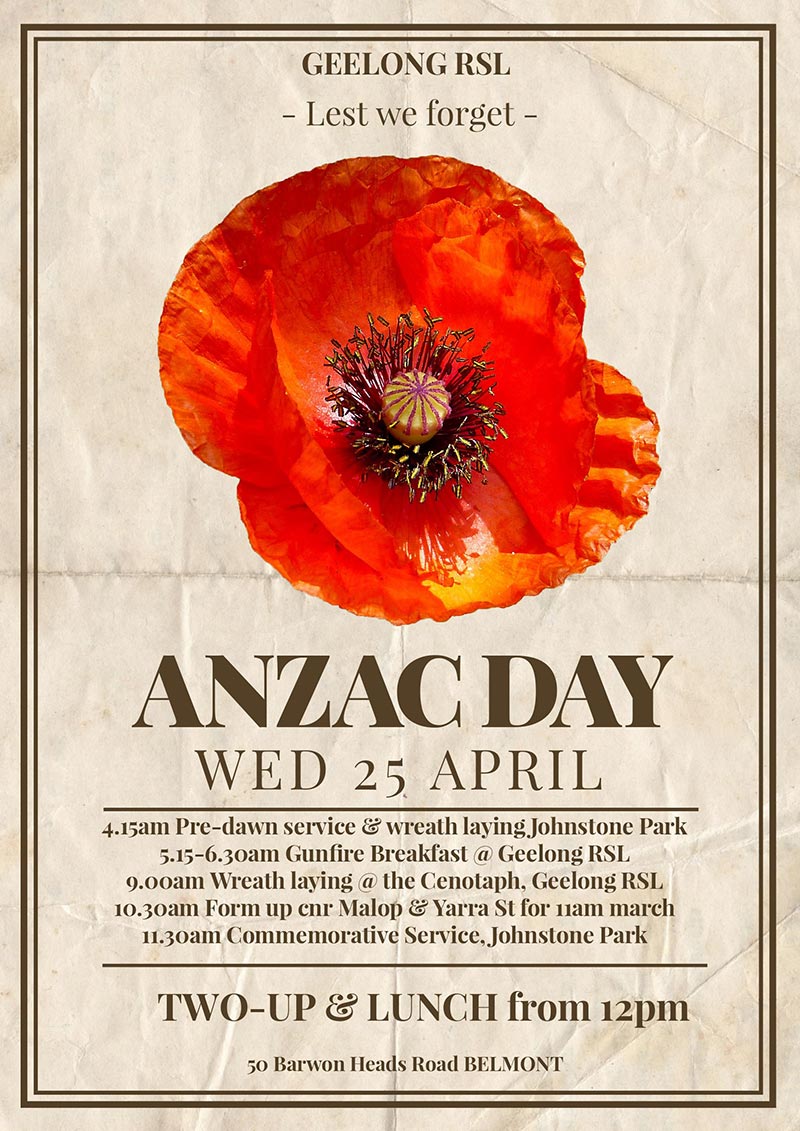